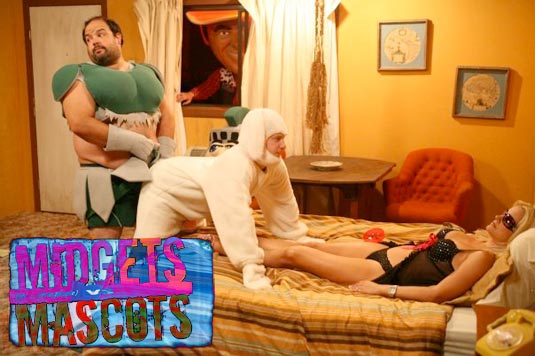 “Midgets vs Mascots,” a shockumentary shot in a style similar to “Borat” in which five little people and five mascots battle for $1 million apiece in outrageous competitions, finished third in voting in the Heineken Audience Award at the 2009 Tribeca Film Festival. As described on the Tribeca Film Festival website, the film’s “hilarity and raunch… struck a chord with TFF audiences” and “is certain to shock and amuse.” Announced tonight, the Heineken Audience Award is determined by audience ballot votes throughout the Festival, which included 85 features and 47 short films from 36 countries. Directed by Ron Carlson and starring Gary Coleman as himself, the film has generated considerable buzz. Over the last month, clips from the movie have logged more than 325,000 online views and tickets to its initial four screenings at Tribeca sold out in two hours, prompting the Festival to add a fifth showing for Sunday, May 3. A cross between Sacha Baron Cohen‘s “Borat” and Johnny Knoxville‘s “Jackass,” “Midgets vs Mascots” is geared toward 18-34-year-old males. In a test screening last November, the film’s scores came back 20 percent higher than the average studio comedy. In head to head testing, “Midgets vs Mascots” also beat seven of 10 relevant comedies, including Jackass, Reno 911, Napoleon Dynamite, Bad Santa, Pineapple Express, Clerks, and Harold & Kumar. Like “Borat,” much of the film is shot “guerilla improv” style, as the two teams of little people and mascots surprise unsuspecting bystanders as they crash restaurants, bars, and neighborhoods.
Continue Reading
Advertisement
You may also like...
Related Topics:gary cole, Tribeca Film Festival