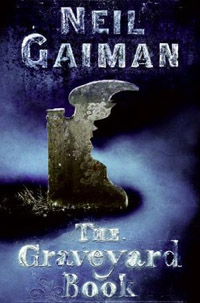 Recently we wrote about 1492 Pictures, a production outfit run by Chris Columbus and CJ Entertainment and their plans. We mentioned that they are at work on three new horror films Killer Pizza, Carpe Demon and The Graveyard Book. Today, we are here to have a little chat about an upcoming adaptation of Neil Gaiman‘s The Graveyard Book, the story about a boy named Nobody Owens who, after his family is killed by a mysterious man, is adopted and raised by the occupants of a graveyard. Gaiman had the idea for the story in 1985 after seeing his then two year-old son Mike “pedaling his tricycle around a graveyard.” Recalling how at home his son looked there, Gaiman thought he “could write something a lot like The Jungle Book but set it in a graveyard.” This fantasy novel is described as “the story of Nobody Owens (called “Bod” for short). At the start of the story, Bod is a toddler who witnesses the murder of his family by a mysterious man known as “Jack”. Bod escapes from the family home before the murderer reaches him and stumbles into a nearby graveyard where the resident ghosts and other supernatural creatures “adopt” him and protect him from the evil Jack and his associates who continue to hunt for Bod. Each chapter of the book is a short story in itself detailing events that occur as Bod grows up in the graveyard.” This interesting story is being adapted as a live-action feature to be written and directed by Neil Jordan (the man we all know from projects like The Crying Game and Ondine), so we guess that guys from “1492 Pictures” definitely know what they’re doing! “We see this as just the beginning of many terrific movies together” that’s exactly what Chris Columbus had to say about their plans, and that’s why we’ll keep an eye on The Graveyard Book!