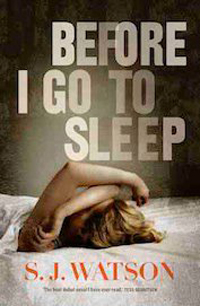 Writer and director Rowan Joffe is quite busy these days. His directorial debut, Brighton Rock, which stars John Hurt, Helen Mirren, Andy Serkis and Sam Riley, is currently playing at the Toronto International Film Festival, and he already has new project coming. That’s an adaptation of Steve J. Watson‘s (British author) debut novel Before I Go to Sleep, project that’s already being described as “psychological thriller” and that will center on: “…a young woman who, after a night of partying, wakes up to discover that she has aged beyond recognition.” At this moment, not much is known about the whole thing, but we do know that Joffe is in charge for the screenplay as well. The movie will be produced under Ridley and Tony Scott’s production company, Scott Free, while StudioCanal will executive produce. It will definitely be interesting to see how the whole thing will work out for Joffe, especially with this kind of story that centers on a strong female character. That’s why with every new update on Before I Go to Sleep we’ll be back!
Continue Reading
Advertisement
You may also like...
Related Topics:Before I Go to Sleep, Rowan Joffe