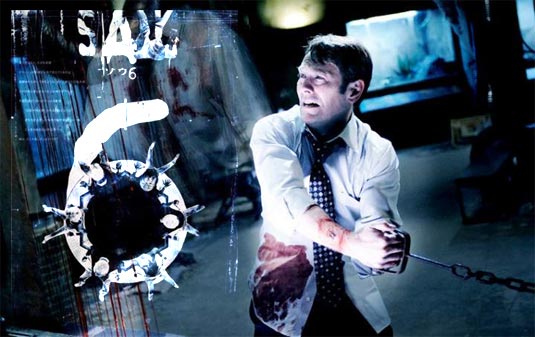 Has there ever been a movie franchise as user-friendly as the “Saw” films? “Saw VI,” the latest installment, may have a new director (Kevin Greutert), but the writers Marcus Dunstan and Patrick Melton, collaborating on their third consecutive “Saw,” make sure that it’s as customer-service-oriented as ever. Somewhere within the Saw universe’s ridiculously convoluted back story is a film showing how the dying “Jigsaw Killer” John Kramer (Tobin Bell) won the lottery, set up corporate offices, and hired legions of worker elves to build a “torture district” the size of Disneyland. It would be a helluva lot more entertaining than watching his uber-secret second protégé (Mandylor, Mandylor, Costas Mandylor) tiptoe around the events of the previous films, which was all that the abysmal Saw V really had to offer…read more [DreadCentral] I really don’t want to talk about the plot, because if you’ve seen a few of these films, then the point of how to have fun with them is the twists and turns of the stories. Saw VI is a very satisfying sequel for a handful of reasons. One of the complaints of the last few sequels, were people felt each entry was incomplete because the film’s would leave plot points left unanswered. Marcus Dunstan and Patrick Melton make Saw VI into a caper for the previous films, finally answering some long wondered questions, while juggling an interesting solo story. We get questions answered, which should please the long time fans, and tells a sick little moralistic tale that goes back to the origin of Jigsaw. Saw VI won’t win over any newbies, but it doesn’t have too. If you’re late in this game, go back to the beginning. Maybe that’s good advice for all of us Saw fans, because you’ll appreciate this film a lot more, with all of the subplots fresh in your mind…read more [KillerFilm] 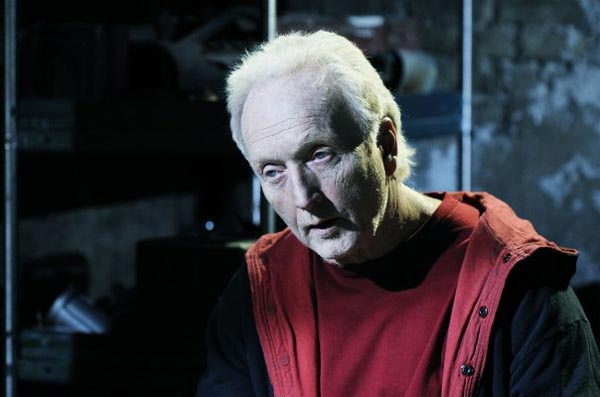 While the SAW franchise is akin to the James Bond films in that it seemingly requires its directors to hew to a house style rather than go off in distinctive directions, Greutert’s background in the cutting room is evident in SAW VI’s brisker pace than its immediate predecessors. He also coaxes a better performance out of Mandylor, who was simply stolid in his previous turns as Hoffman but here actually dials up the intensity a bit. Russell is similarly more focused than in her last go-round, while Bell brings his dependable moral-in-his-own-mind menace to Jigsaw’s appearances and Outerbridge makes for a convincingly slimy and deserving target of torment. Everyone else in the cast fills their functional roles functionally, and the assorted victims die real good, with Francois Dagenais, another SAW stalwart, ladling on plenty of convincing gore… read more [Fangoria]

The opening of the sixth installment showcases the wrong way to make a Saw movie. There are two people in connecting rooms and one will live while the other will die. The only way to escape alive is to cut off enough flesh to dump on a scale, outweighing the other. These people’s crimes are the dumbest yet for a Saw movie. They work for a loan agency that rips off their customers and “destroys lives.” These are not the crimes that make the Jigsaw killer interesting. The fact that the survivor does not learn anything from the experience makes it a failure of the original plan… read more [Shawn S. Lealos, 411mania.com] 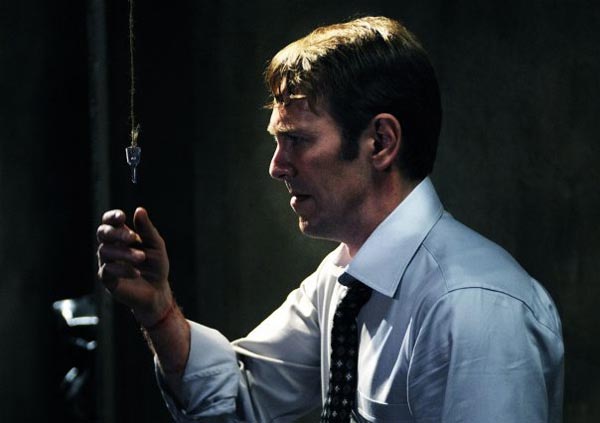 Sorry to break it to fans of the Saw film series, but Jigsaw, a/k/a John Kramer is a self-righteous dick. In comparison to the Jason Voorhees and Michael Myers of the horror world, whose raison d’être is causing carnage mercifully bereft of deeper moral or instructional value, Jigsaw devotes a ridiculous amount of time thinking about what other people do with themselves, and effectively (if ironically) conceives his traps as object lessons in humility, compassion, and self-awareness. Personally, I find this high-handed moralizing far more painful than any evil device he could possibly design, but then again, that’s why I’m not a fan of the series; that said, the latest installment in the Saw franchise appears to fulfill all of the demands of its audience and then some, making it a worthy and faithful entry in a franchise which at this point seems expressly designed to document people dying in increasingly inventive ways… read more [Cinematical] Saw VI’ delivers if you’re in the mood for a quick fix of blood and gore. This is one of those horror films, where being amongst a rowdy and obnoxious audience helps; mine applauded when Jigsaw began to speak of how health insurance companies are really the ones running things. Though the story tries to raise a number of moral issues, it’s ultimately a horror film and not a very good one. As much as I liked many of the dramatic elements of the story, it looks like even that is starting to wear thin because they are trying to keep this franchise going forever… read more [LatinoReview]

The Saw series long ago cannibalized its cleverest bloodbath gimmicks, but now it’s figured out a new way to torture us: by taking a barb-wire stab at political relevance. In the opening sequence of Saw VI, two parasitical bureaucrats of the pre-crash American economy — the implication is that they’re subprime mortgage vendors — pay for their sins, and compete for survival, by seeing which one can lop off a weightier portion of body parts before a timer runs out. The pudgy white guy saws away at his belly fat, but the fierce black woman is way ahead of him — she grabs a butcher knife and hacks, hacks, hacks off her forearm, easily outdoing his measly pound of flesh… read more [EW] SAW 6 is more of the same but thankfully its also not SAW 5. SAW 5 was a debacle. It sucked from start to finish and was the definition of a last minute cash in on the SAW franchise. That said SAW 6 is nothing like SAW 5. Although it does not hold muster to the original SAW which was easily the best SAW 6 blows away SAW 5 and is on par with SAW 4 which I really enjoyed. Back are diabolical traps, insane carnage and explosive killers… literally and metaphorically. The film is simply put gorey, intense and at times quite disturbing. It lacks any really thrills or twists but it is definitely a trip down torture porn lane. Having seen the movie its not a big shock that SPAIN gave the film an X rating… read more [MoviesOnline.ca] 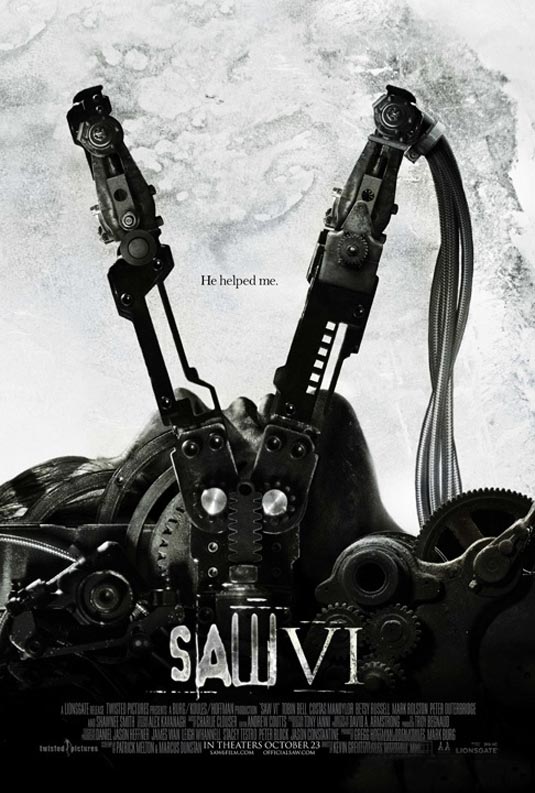 Saw 6 Poster Thank you very much Patrick Melton and Marcus Dunstan. Seriously, thank you. After SAW V, I was convinced there was nothing that could be done to make this sixth installment of Saw work. But they did and it does. As the torture and violent murders still are a huge part of the latest, it once again focuses on a couple of main relationships. Yet this time, Tobin Bell is featured in a very satisfying way as his connection to many of the characters in the series is explained. Now, it is a bit of a challenge to talk about what worked without giving too much away. What can I tell you without revealing too many secrets and surprises? If you don’t want to hear any spoilers at all, I suggest you stop reading because as much as I don’t want to ruin it for anyone, there will be spoilage (although very minimal, I promise)… read more [Joblo] Saw VI Video Review:
Continue Reading
Advertisement
You may also like...
Related Topics:Costas Mandylor, Kevin Greutert, Marcus Dunstan, Patrick Melton, Saw 6, Tobin Bell

Where The Wild Things Are Review
A Christmas Carol Review
Advertisement