Hey guys, we’re here to remind you that Peter Sullivan‘s latest horror movie titled Summoned is set to open this June! A brand new poster, some cool images and an official trailer for the whole thing have arrived, and I’m sure you’re going to love it! As you probably know, Cuba Gooding Jr. and Ashley Scott will lead us through this intense story which will remind us that some deaths are not a coincidence…

Peter Sullivan directed the movie from his own script which revolves around Scott’s character – a woman named Laura Price, who, together with eleven other jurors found the notorious serial killer guilty of capital murder, and he was sentenced to death.

But now, mysterious things are beginning to happen to the jury members and tragedies claim the lives of one after the other. [youtube]http://www.youtube.com/watch?v=HfnbzrbvWzI[/youtube]

Recently divorced artist Laura lives a quiet life in Marin County, spending time preparing for an upcoming show. One day, she sees a news story about a man named Nathan who’s been found dead, suspected of having jumped off the roof of his San Francisco apartment building. Something about this bothers her, and we follow her to a local retirement home, where she tells her friend Frank what’s happened. It turns out that Laura, Frank and Nathan all served on the jury for one of San Francisco’s most high-profile cases – the trial of infamous serial killer Evan Barber, known as the Midnight Murderer. The jury ultimately found Evan guilty, and he was executed soon afterward. While the authorities are quick to dismiss Nathan’s death as a suicide, Laura is suspicious. When Frank also turns up dead, the coincidence is too great to ignore. She starts looking into Nathan’s last days, and learns that he’d been working on a book about his experiences, and re-examining some of the evidence from the case. Meanwhile, Laura starts to get the feeling that someone, or something, is following her. Could she be next?

Beside Cuba Gooding Jr. who stars as Detective Callendar and Ashley Scott who plays Laura, the rest of the Summoned cast also includes Scott Whyte as Nathan, Bailey Chase and Tichina Arnold. The movie will be released on June 18th, 2013. 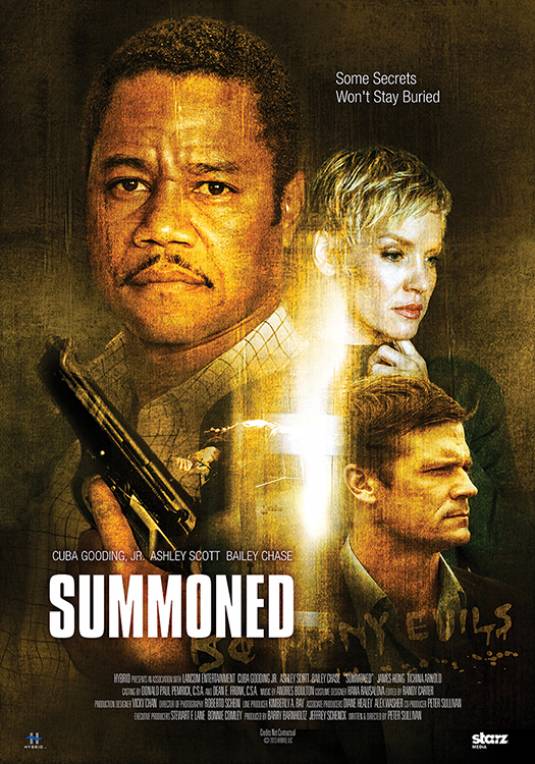 Pineapple Express 2 April Fools’ Trailer For THIS IS THE END
Watch: Trailer For GREETINGS FROM TIM BUCKLEY
Advertisement