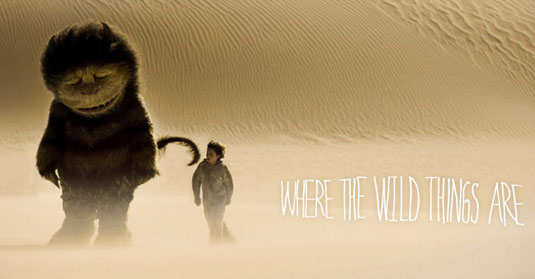 The children’s classic “Where the Wild Things Are” is only nine sentences long. The new, live-action film version is more than 90 minutes long. You might expect that clever director Spike Jonze (Being John Malkovich, Adaptation) and trauma-tested co-writer Dave Eggers (A Heartbreaking Work of Staggering Genius) would pad the story with extraneous detail to captivate modern kids and their parents. Where the Wild Things Are is about a child’s innocence brushing up against reality’s prickles. As king, Max (solidly played by newcomer Max Records) inherits the wonder of power, bossing around the monsters in fits of rumpus fun. The child-like tyranny of fun is easy, but the party’s sheen wanes, and Max faces the actual responsibilities of leadership. When forced to deal with being a caretaker, mediator, and confidant to his kingdom’s dysfunction, Max is in way over his head. The monsters of his fantasy world engage in the same frustrations and pettiness he sees in adults of his real childhood, and the solutions to their problems reveal deeper fissures in the group’s fabric. It seems as though Max’s come-to-life toys have become manifestations of his own emotional baggage…read more [Twitchfilm] Spike Jonze WHERE THE WILD THINGS ARE is brilliant. It is strange, wild, wicked, terrifying… it is an absolute classic. I remember growing up with the book by Maurice Sendak, and it having a very warm place in my heart. Even today I remember it. I loved the idea that monsters were just like us, they feel and they are oftentimes misunderstood. And as beautiful as the book is, Jonze managed to take that beauty and create a near flawless piece of fiction that lingers somewhere between reality and the fantastic imagination of childhood. I couldn’t have been more pleased with the outcome as it brings out what made the book a classic work of fiction, but it also brings a very emotional and human element to the story of Max and the “wild things”. This is a movie going experience that should not be missed. Young or old, this is a magnificent motion picture that may well end up being the best film of the year come December…read more [Joblo] This is not the kids movie that we are used to seeing these days. There are no pop culture references and all the other crap that all studios that aren’t named PIXAR put in their movies. This is truly nothing you’ve ever seen before. Spike Jonze has successfully adapted a 10 sentence book into a 90 minute film by staying true to the original source and yet makes a personal film that takes us back to how we saw the world when we were little kids. Although I understand why the studio is worried about how this will play out, I am glad that Spikes vision is the one they stuck with. Even if this doesn’t do well, at least the film will always exist for those who appreciate…read more [Spill] 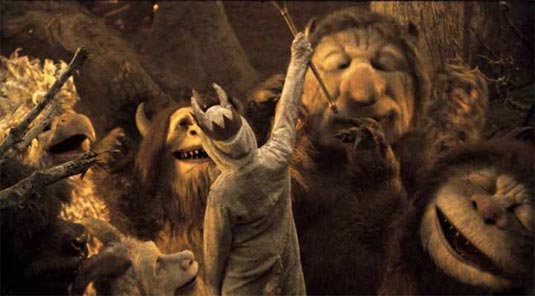 I don’t want to know how Spike Jonze made Where the Wild Things Are. I’d rather simply simmer in the joy of having watched it unfold before my eyes. Where the Wild Things Are is a startling achievement from a director with a clear vision and the strength to see it through. Working from — but not slavishly adapting — Maurice Sendak’s beloved children’s classic, Jonze has made a movie that can’t help but create controversy because of its utter simplicity, which masks layers of complexity…read more [Huffington Post] Here’s an example: My brother and I are building a fort in our basement. We’ve emptied out our two toy chests and pushed them together with a large cardboard box to make a spaceship. One of our toy chests is the “observation room,” a tiny plastic container that could only fit one of us. I was relegated to the “observation room” which I quickly made the cockpit (since I’m older and therefore the captain). As my brother was outside the fort on a “space walk” repairing our ship, for some reason that was a mystery then and remains one to me now, I removed the cockpit windshield (a small, transparent plastic tub) and threw it at my brother’s head as hard as I could…read more [Filmonic] I joked with a colleague that an alternate title for the film could have been P.S. Divorce Is Hardest On The Kids, but the truth is I’m not sure I’ve seen another mainstream movie that better examines the way kids deal with a parental break-up, be it metaphorically or literally. Jonze, who adapted Sendak’s book with the help of novelist Dave Eggers, lays the groundwork for Max’s odyssey in the opening scenes, not only physically but emotionally: we not only watch him build an igloo, alone, in a neighbor’s front yard, but see how he reacts when another kid smashes it in a snowball fight; or later, witness Max’s misplaced outrage, his subsequent remorse, and finally, his redemptive creativity in between sequences where he literally constructs bedroom-sized universes where stuffed animals do his bidding…read more [Cinematical]

Only a few minutes into Where the Wild Things Are, a young girl seated behind me whispered to her father, “Dad, when will we see the monsters?” This was about ten minutes into this 94 minute film and it wasn’t until about 25 minutes those monsters showed up. With everything I have read regarding Maurice Sendak’s book that inspired this adaptation, I haven’t seen anyone admitting what draws kids into the story is Max’s wild rumpus with a group of sharp-toothed monsters that eventually come to love him. Instead, it’s a bunch of high-brow commentary on how a book meant for kids ranging from 4 to 8-year-olds connects with them on some higher level. Since when were 8-year-olds reading into books with ten sentences and coming away with some life-affirming understanding as opposed to wanting to just have fun and be a kid? Has being a kid become that miserable of a chore?…read more [RopeOfSilicon] Yet, I’m still not in love with it completely. I know people who absolutely adore this movie, and I can understand where they are coming from. For me, it’s not a matter of crushed expectations. I love the book as a child and as an adult, but I’m not devastated by the choices needed to make this an actual feature length film. And there’s nothing wrong at all with any aspect of the production. Actors are grand, production design is spot-on, fx are at the top of their game. (Although the music, by Karen O. from the Yeah Yeah Yeahs, feels a bit forced upon some of the scenes. Just sayin…). In a strange way, I liken it to Benjamin Button, another touching and technically amazing film that just passed me by. Although I felt more warmth and joy from this film…read more [MoviesOnline.ca] The parallels to Max’s real life are obvious in retrospect, but again Jonze avoids making it too deliberate, following pointless plot strands about the fort and the nearby desert and some minor relationship problems, none of them illuminating anything about either the wild things or Max. The central idea of the film is that being a kid is far from carefree, and even fun and games come with hurt and confusion, but only occasionally does that idea peek past all the inter-wild thing drama and endless montages of running, jumping and playing. Various visual moments brilliantly capture other emotions– Max’s wonderment at the new world as he rides on Carol’s back, his contentment in a giant snuggle pile of monsters– but the more complicated stuff never finds a good way to express itself…read more [CinemaBlend]

To be honest, Where the Wild Things Are connected with me on a deeply personal level. While I’m not a fan of reviews that are dripping with non-pertinent personal information, the reaction I had to the film was obviously informed by the deep, serious connection I felt to Max. When I was in 5th grade I was a bright, creative kid who was also angry and troubled. Just because I was smart and could write well and had a big imagination didn’t mean I could really process the emotions of being the child of a single mother, or the loneliness and isolation I often felt. I lashed out, and the school principal demanded that my mother bring me to see a child psychologist, which just made me feel more alienated and broken. I never bit my mother, but there were moments where that didn’t seem so unlikely. I eventually discovered punk rock (my friends discovered the skate boards. I was never the kind of active kid that Max is) and other Wild Things of my own, although it’s obvious I never left some of those feelings behind. But watching this film was in many ways like watching the untold story of my pre-teen years, and the wave of recognition that washed over me was powerful. This isn’t a story that usually gets told in movies – films have a very specific set of outcasts and troubled kids, and well-meaning angry creative fuck-ups like Max and me and Spike Jonze and probably you aren’t in that set – and it definitely never gets told from the point of view of the kid…read more [CHUD] Getting this part out of the way up front: I did not read the book, nor did I have it read to me as a kid (I was more of an Epic of Gilgamesh-vintage child). That having been said — and judging it entirely on the basis of its effectiveness as a movie — I was very much impressed by Where the Wild Things Are, director Spike Jonze’s take on the Maurice Sendak children’s picture book (much beloved by everyone younger than me, apparently.) It is melancholy; it is deep; it is dark, much darker than expected in a movie aimed at kid audiences…read more [PegasusNews] 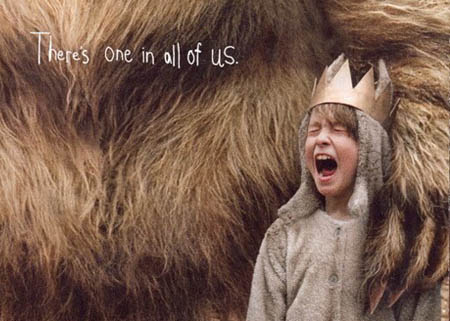 Continue Reading
Advertisement
You may also like...
Related Topics:Maurice Sendak, Spike Jonze, Where The Wild Things Are