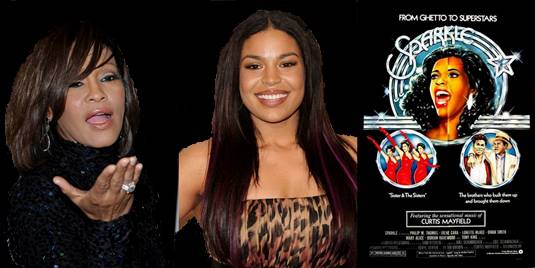 Colgate smile here I come – Whitney Houston, along with American Idol winner Jordin Sparks (her feature film debut) and Faster’s Mike Epps, will be seen in the remake of 1976′s Sparkle. This Sparkle will not be a modern re-telling of the original version, Harlem, New York, 1958, but rather will be set in the 1960s Detroit during the rise of Motown. In the original story the Williams sisters – Sister, Dolores and Sparkle – are singers in their local church’s teenagers’ choir along with their friends Stix and Levi and the girls’ mother Effie, works hard and struggles to keep her girls safe, especially the high-spirited Sister. But this story will center on the youngest sister Sparkle and her struggles to become a star while overwhelming issues that are ripping her family apart. Of course, Sparks will play the titular main character named Sparkle; Houston’s role will be Sparkle’s mother Effie and Epps will portray Satin, a stand-up comedian who marries one of the sisters and sending her into a cycle of drug abuse. Ten years before, Houston was a part of the producing team trying to get Sparkle made at Warners. But this time around, Sony Pictures is behind the movie and Houston is a part of the cast for the first time since 1996 The Preacher’s Wife. Music-themed Sparkle remake reteams director Salim Akil with Epps, who starred in the helmer’s wedding movie Jumping the Broom. The script is written by Mara Brock Akil. As for Epps, he recently signed on to star in the indie thriller Vipaka, opposite Forest Whitaker and Anthony Mackie. There’s no exact word on when filming will begin. Check out the Hooked on Your Love song from original Sparkle movie, performed by Lonette McKee, Irene Cara and Dwan Smith, the girls now known as ‘Sister & the Sisters.’ [youtube]http://www.youtube.com/watch?v=P_ceVJPgGfE[/youtube]

Sparkle – Hooked on Your Love

Kelly Reilly to Join Denzel Washington In Robert Zemeckis’ FLIGHT
Stallone Might Get Nicolas Cage and John Travolta For The Expendables 2?
Advertisement