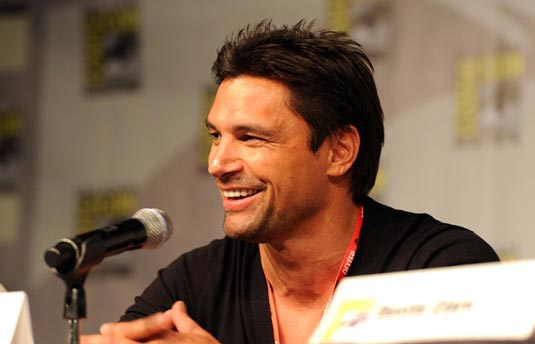 If there’s a single good thing in Spartacus: War of the Damned being the last season of Starz’s awesome drama, it’s that the show’s conclusion should free up the schedules of its cast and allow them to pursue other projects. For Manu Bennett, “other projects” includes a big role on the CW’s Arrow. According to EW, Bennett is set to play the role of Slade Wilson. Right now, there’s no word on whether Slade will go on to become the Deathstroke during his arc on the series as he does in the comics, but he’ll be introduced in flashbacks as Slade and Stephen Amell‘s Oliver Queen form an uneasy alliance on the island of Lian Yu. Beyond that, fans will have to wait and see where his story goes. Fans of the comics may have a better idea of what to expect from the character. As a big fan of Spartacus and of Bennett (sigh…), I’d say this is a great piece of casting news. In the gladiator drama, Bennett plays the strong, well-sculpted, doe-eyed… ahem, but not much talkable ally to Spartacus, Crixus, who has proven to be an important part of Spartacus’ army, despite their initial rivalry in the series’ first season. Also, loving the fact that Crixus has proven to be as passionate in his love for Naevia as he is loyal and strong, I’m not so fond of the idea of him playing a character that sounds like a villain (or on his way toward becoming one), but at the same time, it’s not difficult to picture him in a role like that (being a bad-ass he is). And after years of training for his role in Spartacus, he should in pretty good shape to play Slade Wilson, who, from what I understand, is a pretty big guy. No word on exactly when his episodes will air, but Bennett has signed on for appearing in multiple episodes.
Continue Reading
Advertisement
You may also like...
Related Topics:Arrow, Manu Bennett, Stephen Amell